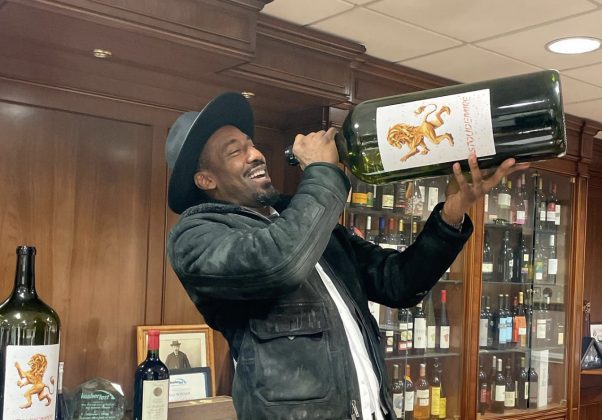 Stoudemire was serving as a player development assistant for the professional basketball team, the Brooklyn Nets. On Thursday morning, May 12, while appearing on EPSN he disclosed that he has left the Nets.

Amar’e Stoudemire was born on November 16 in the year 1982 in Lake Wales, Florida. He was born to his parents, Hazell and Carrie. He has a brother named Hazell Jr. His parents got divorced when he was still a kid. Then along with his mother, he migrated to upstate New York where she used to pick apples during the fall.

Stoudemire’s mother began a new relationship with a man named Artis Wilmore. He had a step-brother, Marwan from his mother’s new boyfriend. His mother was involved in forgery and petty theft due to which she stayed mostly in and out of prison.

Amar’e started playing organized basketball when he was 14. He reportedly studied in five high schools in between. His freshman season was cut while attending the Lake Wales High School in Florida. Then he transferred to North Carolina-based Mount Zion Christian Academy to play for the coach, Joel Hopkins. After returning back to Florida, he studied at Dr. Phillips High school. He eventually graduated from Cypress Creek High School in 2002.

Amar’e only got to play two full seasons due to all the transfers. In his senior year, he excelled in his game by scoring an average of 29.1 points, 6.1 blocked shots, 15 rebounds, and 2.1 steals per game. Being listed as the No. 1 player in 2002, he was earlier committed to joining the University of Memphis. Nevertheless, he later declared for the NBA draft.

Stoudemire was drafted by the Phoenix Suns in the 2002 NBA draft. He made an average of 13.5 points and 8.8 rebounds in each game in the rookie season while playing against the Minnesota Timberwolves in December 2002. He eventually earned the NBA Rookie of the Year award and became the first player to win the award after being drafted out of high school.

You May Also Like  Dmitry Bivol Net Worth: How Rich is the Russian Boxer in 2022?

Amar’e went through the microfracture surgery in October 2005 during the 2005-06 NBA preseason. He attended the 2006 USA Basketball Camp in Las Vegas to play in the 2006 FIBA World Championship, however, in the end, he did not play. In February 2007, he appeared in the 2007 NBA All-Star Game. He was about to play for the national team in the 2008 Olympics. However, later he withdrew his name. In the 2007-08 season, he led the Phoenix Suns and scored 25.2 points and 9.1 rebounds in each game.

Stoudemire became an unrestricted free agent after opting out of his contract with the Phoenix Suns in June 2010. After a month, he agreed to sign a five years contract worth $99.7 million with the New York Knicks. He had one of the best seasons in his career n the end of the 2010-11 season. Amar’e was also named to the All-NBA Second Team.

Amare’ played his last game as a professional basketball player in Jan 2020 after signing with Maccabi Tel Aviv. He also earned the Israeli Basketball Premier League Finals MVP honors when the Maccabi Tel Aviv lifted the championship trophy in July 2020. Stoudemire was hired as a player development assistant by the Brooklyn Nets on October 30, 2020. He made an announcement of not returning back to the Brooklyn Nets for the 2022-23 season on May 12, 2022.

Following the announcement, on Thursday, May 12, he ripped into James Harden’s dedication and lack of work ethic. When he was asked about Harden still being capable of major scorer of Philly, he revealed that that Harden is not in top shape and not really focused in the off-season.

Amar’e Stoudemire was married to Alexis Welch with whom he has four kids. He was dating Alexis since 2002. The two became engaged in May 2012 and married on December 12, 2012. He filed for divorce from Alexis in October 2018. However, the case was dismissed in July 2019 as he failed to submit the required documents.

In August 2020, Alexis filed for divorce back. He responded to the case a month later and a final judgment on the dissolution of the marriage was entered on December 21. Following that, Amar’e and Alexis reached a deal where they made a decision on dividing their assets and parenting plan for custody.

Amar’e Stoudemire’s personal wealth is estimated to be around $70 million as of 2022. He earned estimated total career earnings of $161,628,892 from appearing in 14 seasons game of his NBA career.

Jerry Jeudy Net Worth: How Rich is the NFL Player Actually?

Byron Allen Net Worth: How Rich is the Businessman Actually in 2022?

Brian Kilmeade Net Worth: How Rich is the Fox News Presenter in 2022?

Pat Perez Net Worth: How Rich is the Golfer Actually in 2022?

Willie Falcon Net Worth: How Rich is Drug Kingpin Actually in 2022?

Da Brat Net Worth: How Rich is the Rapper Actually in 2022?

AOC Net Worth: How Rich is the Congresswoman in 2022 Actually?

Moneybagg Yo Net Worth: How Rich is the Rapper Actually in 2022?

Jen Shan Net Worth: How Rich is the RHOSLC Star Actually in 2022?

Schoolboy Q Net Worth: How Rich is the Rapper Actually in 2022?

Kurt Sowers Net Worth: How Rich is the ‘Joe Millionaire’ Star Actually? Slimelife Shawty is an American rapper and hip-hop artist from Atlanta. He is best known for his hit tracks “Slimestyle”,... DC The Don is an American rapper and hip-hop artist from Milwaukee. He is best known for his hit songs... Schoolboy Q Net Worth: How Rich is the Rapper Actually in 2022?

Quincy Matthew Hanley, better recognized as Schoolboy Q is an American rapper. He has been known in the music business... Jack Harlow Net Worth: How Rich is the Rapper Actually in 2022?

Jack Harlow is an American rapper and songwriter, who is best known for his song “What’s Poppin”. He is currently...